What is Reputation and How do I Get It?What is Reputation?In the context of necDAO, the amount of Reputation you have refers to your degree of voting power (and membership) within necDAO. Only Reputation holders are members of Nectar DAO and subsequently, have the right to determine the success of proposals. Please note however that Proposers do not need Reputation to submit. Reputation is not a token and cannot be transferredReputation is best thought of as 'points' assigned to your walletThe more Reputation you have, the stronger your influence over proposalsClaiming reputation will begin in the Bootstrap phase and continue beyond this via staking.For some deeper thinking around Reputation, check out this DAOtalk thread.How to Get Reputation?Reputation in necDAO can be earned in a number of ways:During the initial bootstrap phase, through: Staking Nectar Tokens Holding Nectar on-chain for an Airdrop Bidding GEN tokens in an auction Post-Bootstrap Phase, through: Staking Nectar Tokens Submitting Proposals & Requesting Reputation Voting the winning wayBelow we go into depth for each option. BOOTSTRAP PHASEThis one month Bootstrap period provides 3 ways to earn Reputation and become a member of necDAO. Two of the ways are confined within the Boostrap phase, and the 3rd is ongoing beyond the boostrap phase. 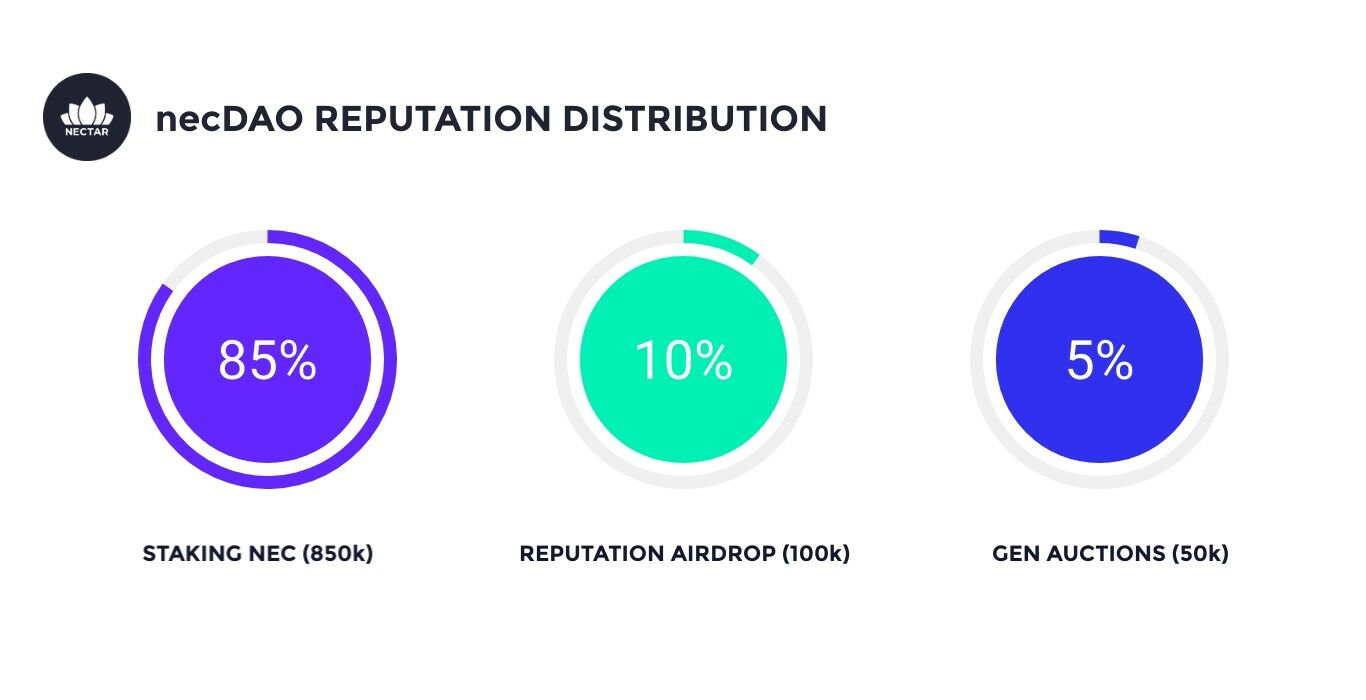 Staking NEC (850k) 🥇Nectar holders who stake will enjoy a notably higher portion (85%) of available Reputation.Nectar can be staked for up to 12 periods (each lasting one month) with more Reputation being granted to those who stake a larger amount and/or for a longer periodOnce staked, you can extend your staking period at any time (for up to 12 months total) but not shorten. E.g. if you stakes for 5 months, you can extend for 7, but if you staked for 12 months, you cannot extend but will need to re-stake at the end of the 12 month period.Whilst your Nectar tokens are staked, you won't benefit from Nectar-based discount fees on DeversiFiThere are a number of positive side-effects to staking Nectar above and beyond gaining more Reputation. Not only does it increase the transparency of the Nectar ecosystem but it reduces circulating supply by taking Nectar off the open market. This should have positive effects on Nectar, not least because it's true supply will be reflected on sites such as CoinMarketCap. Don’t own Nectar but want to lock? Nectar is tradable against USDt and ETH on both DeversiFi and Bitfinex.Hold Nectar for an Airdrop (100k) 🥈100,000 Reputation will be airdropped to Nectar holders who hold NEC in an on-chain wallet at the time of the snapshot. This snapshot will occur at the time the Bootstrap UI contracts are deployed on the 18th of December 2019.This event will only happen once and holders who do not move their Nectar on-chain will never be able to get this Reputation again.Bid GEN in an Auction (50k) 🥉50,000 Reputation will be available by bidding the DAOstack GEN token in a Reputation auction.GEN will be biddable in any of 10, 3-day auction, awarding a proportional amount of Reputation based on the amount of GEN bid in each intervalAny amount can be bid, with a higher amount securing a greater reward of ReputationThe GEN collected during this auction will fuel the necDAO's prediction marketsPOST-BOOTSTRAPOnce the Bootstrap Phase has concluded, you will be able to earn Reputation on an on-going basis in the following ways:  Staking NEC 🥇As detailed aboveSubmitting Proposals & Requesting ReputationA small amount of Reputation will be awarded to those who submit successful proposals to necDAOConversely, those who submit unsuccessful proposals will not be awarded ReputationReputation can additionally be claimed through a proposal. The amount desired can be input within the Alchemy interfaceVoting the Winning WayIf you vote the right way on a given proposal, your Reputation score will increaseConversely, voting the wrong way will decrease your scoreFor any questions and to become a member of the necDAO ecosystem, join at:TwitterTelegramDAOtalkMedium

Was this article helpful?